Click image for details and price or to buy from Amazon.co.uk

A retired teacher, Barbara writes wonderful stories for small children that show them the wonders of the natural world. ‘Ferdy The Frog’, the first in her Pond Pals series was published in 2019 and ‘Delelza The Duck’ in 2020. Next up ‘Walter The Water Shrew’. 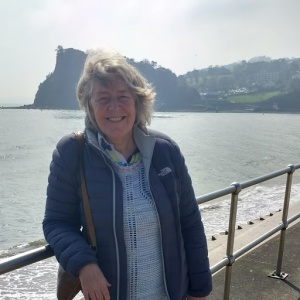 “I was born in Teignmouth, a beautiful seaside town in Devon, in 1950, a scraggy little thing, with a genetic heart condition. With no cousins or siblings I was indulged by a loving family who were told I would not see my 21st birthday. Then along came the NHS, an enthusiastic young GP and an amazing surgeon from Hammersmith Hospital, who saw pioneering heart surgery in the USSR and was looking for guinea pigs. That was me and here I am, nearly 70 years later.

“From an early age I only ever wanted to to teach ….and sing. I attended Teignmouth Grammar School which I loved although I didn’t study as much as I should have and was lucky to scrape enough A level grades to be accepted into the Sarum St Michael Teacher Training College in Salisbury.

“I enjoyed singing as a semi professional in the 70s and 80s and taught in village and urban schools as I moved with my husband and 3 children. While teaching year 6 in Reading, as part of the National Curriculum, we looked at various writers for children and their different styles. They particularly enjoyed writing stories for younger children. I enjoyed writing them too.

“Although we live near Reading, we bought a cottage ‘back home’ in Bishopsteignton, near Teignmouth, to be near our daughter and grandchildren. This is where I began writing after breaking my ankle in her garden. For 6 weeks I was frustrated and bored and began writing stories in a similar style to the stories I wrote with my year 6 classes.

“I wrote a series about animals that live around a pond in a large garden. They are collectively called the Pond Pals. For several years they lingered on my laptop until, by chance, I met Andrew Sparke on my old school Facebook page and we got chatting about an English teacher who inspired us both and I told Andrew about my stories. We met and here we are.

“I have also been fortunate to meet, again through Facebook, a young illustrator, James Whitehead, the grandson of an old friend, who can see my vision of my characters exactly as I see them.

“After meeting Andrew and James I have renewed enthusiasm to write again, this time for my grandchildren who love learning about the natural world.” 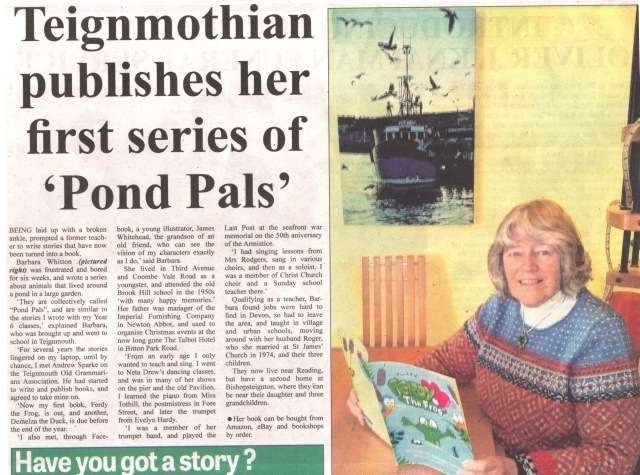 PUBLISHER’S NOTE: A surprising fact is the disproportionate number of authors who’ve emerged from a small school in South Devon, Teignmouth Grammar School. Four of them are published by APS Books: Barbara Whitton, Chris Grayling, Pete Sears and Andrew Sparke. In addition we publish a discography for another TGS veteran, Phil Beer and his folk band Show Of Hands. Suspect some credit’s due to teachers like Adam O’Riordan and Adrian Davis as well as the central hive of all forms of creative energy that was the TGS Annual Eisteddfod.